Hydrogen peroxide (H2O2) and ozone therapy are two alternative cancer treatment protocols that have been in the spotlight recently. If you have cancer, flooding the body with oxygen is crucial for the destruction of cancer cells and the boosting of the body’s natural immune response. H2O2 or ozone therapy are two of the best ways to accomplish this. 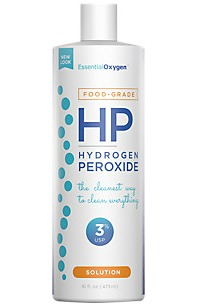 The hydrogen peroxide protocol for treating and reversing cancer is highly controversial. In fact, it’s right up there with the use of cesium chloride and vitamin B17 (laetrile). What’s really strange about this though is hydrogen peroxide was actually used extensively in medicine during the 19th and 20th century - that was until big profit pharmaceutical drugs came on the scene.  Once pharmaceuticals took over, H2O2 was discarded as a treatment option by the medical profession.

Now all you read about is how dangerous hydrogen peroxide is, yet its success rate for treating diseases, including cancer, is impressive. In the 19th century H2O2 was used successfully to treat various bacterial diseases, particularly syphilis, when nothing else worked. In the 20th century, hydrogen peroxide was used to combat ailments such as typhoid fever, tuberculosis, chlorella, whooping cough, stomach ulcers and asthma.

The medical profession now say that hydrogen peroxide is dangerous yet mother’s milk contains high concentrations of H2O2. If it’s so dangerous then what about all of those babies being breast fed? Surely they would be at risk? Of course, they’re in no danger at all. We know that mother’s milk is one of the healthiest and most nutritious substances there is and the hydrogen peroxide contained in mother’s milk (particularly in the colostrum) is crucial for stimulating and building up an infant’s immune response. But this gives you an idea of how distorted the view of hydrogen peroxide has become.

Over the past 70 years, approximately 15,000 medical practioners, naturopaths and homeopaths in Europe have recommended and prescribed H2O2 to over 10 million people to treat more than 50 different diseases, including cancer. To date, over 6,100 articles of scientific literature reiterating and confirming the success of ozone and hydrogen peroxide therapy (bio-oxative therapies) are presently in circulation. But the mainstream medical community still continues to ignore this, and instead, persists in poo-pooing this amazingly simple and inexpensive treatment option that could potentially save thousands of lives. 1

Bio-oxidative treatments such as hydrogen peroxide (H2O2) and ozone therapy produce a variety of positive health benefits. They do all of the following (but not limited to)…

·  Increase oxygen delivery from the blood to the tissues (healthy cells require oxygen and cancer cells are damaged by oxygen).

·  Anti-angiogenic, which means they inhibit the growth of new blood vessels that feed cancerous tumors.

·  Oxidize petrochemicals and other toxic substances so they lose their toxicity.

·  Cause the production of interferon, tumor necrosis factor, and other cytokines, which are required for destroying infections and cancerous cells.

·  Boost the efficiency of the body’s antioxidant enzyme systems which search for and destroy harmful free radicals.

Hydrogen peroxide stimulates our body’s natural killer cells or NK cells (which are a type of white blood cell). These NK’s attack and destroy cancer cells as soon as they try to metastasize. The body’s immune system or T-cells release hydrogen peroxide to kill invading parasites such as bacteria, viruses and fungi. Recent discoveries have found that cancer is actually a type of fungus, so it makes sense that H2O2 could destroy this infection as well. It’s also interesting to note that the lactobacillus bacteria (good gut bacteria) located in the large intestine also produces hydrogen peroxide to destroy candida fungus.

When your own body produces a substance to kill unwanted pathogens, it can’t be all that bad!

Hydrogen peroxide is highly oxygenating to the body. It’s essentially just water and oxygen, but has one extra oxygen atom. This is what gives HP its power. When taken orally or intravenously, H2O2 gives the body a high concentration of oxygen, which in turn causes diseased cells to die and healthy cells to become revitalized. This is why it works so well on cancer cells (which are diseased cells).  Remember on our main cancer cure(s) page I talked about Dr Otto Warburg and how he received the Nobel Prize in medicine back in 1931 after proving that cancer cannot exist in an oxygenated environment? The bottom line is when you oxygenate the body, cancer is dead in the water!

So hydrogen peroxide has a twofold effect on cancer cells. First, it significantly enhances the body’s own immune response or our natural killer cells to wipe out cancer cells, plus it creates a healthy “oxygenated “environment where fungus, including the fungus that causes cancer, cannot survive (fungus can only survive in an acidic environment).

In one study performed back in the 1950’s, Dr. Reginald Holman added a 0.45% hydrogen peroxide solution to the drinking water of rats that had cancerous tumors. Astonishingly, the tumors completely disappeared within 15 to 60 days!

In Mexico, health practitioners at the prestigious Gerson Institute for cancer and La Gloria Clinic enthusiastically recommend the hydrogen peroxide treatment to their patients due to its effectiveness.

And one of the world’s leading authorities on healing the body naturally, Dr David Williams, had this to say about hydrogen peroxide therapy…

“I’ll admit I was skeptical when I first learned about using H2O2 orally or intravenously. This healthy dose of skepticism, however, led to a great deal of investigation, clinical work and experimentation. And while I realize a large majority of readers will probably never be convinced that H2O2 is a safe and effective compound, I am. Hydrogen peroxide is safe, readily available and dirt cheap. And best of all, it works!” 2

How to Use Hydrogen Peroxide to Reverse Cancer…

When H2O2 is used as directed, it’s safe and highly effective. You do need to make sure that you use it correctly though – this is important. In a concentrated dose, hydrogen peroxide can burn. You must also only ever use food grade hydrogen peroxide (such as these) for internal use. In addition to this, H2O2 should not be combined with another “oxygenating” cancer treatment such as the baking soda/molasses treatment. We advise that if you’re considering the HP protocol then you should first read this book in its entirety… The One Minute Cure – The Secret to Healing Virtually All Diseases. This excellent book tells you everything you need to know on how to use the H2O2, along with how to get the most out of it for successfully treating and reversing all forms of cancers.

So we suggest that you follow the recommended 46 day hydrogen peroxide protocol (pge 74), then once you get down to the suggested “maintenance” dose, drop the H2O2 completely and switch to this cancer treatment protocol… Stunning Natural Cancer Treatment. By doing this, you are continuing to alkalize or oxygenate the body in an effective and highly beneficial way. Keep in mind too that once you begin the “Stunning Natural Cancer Treatment” protocol, it should be followed indefinitely from that point on. So basically, once you get to the maintenance part of this protocol/treatment, you stay on this for the rest of your life (to prevent the cancer from returning). The maintenance phase keeps the body nicely alkaline or oxygenated, along with supplying vital nutrients, antioxidants and crucial co-factors.